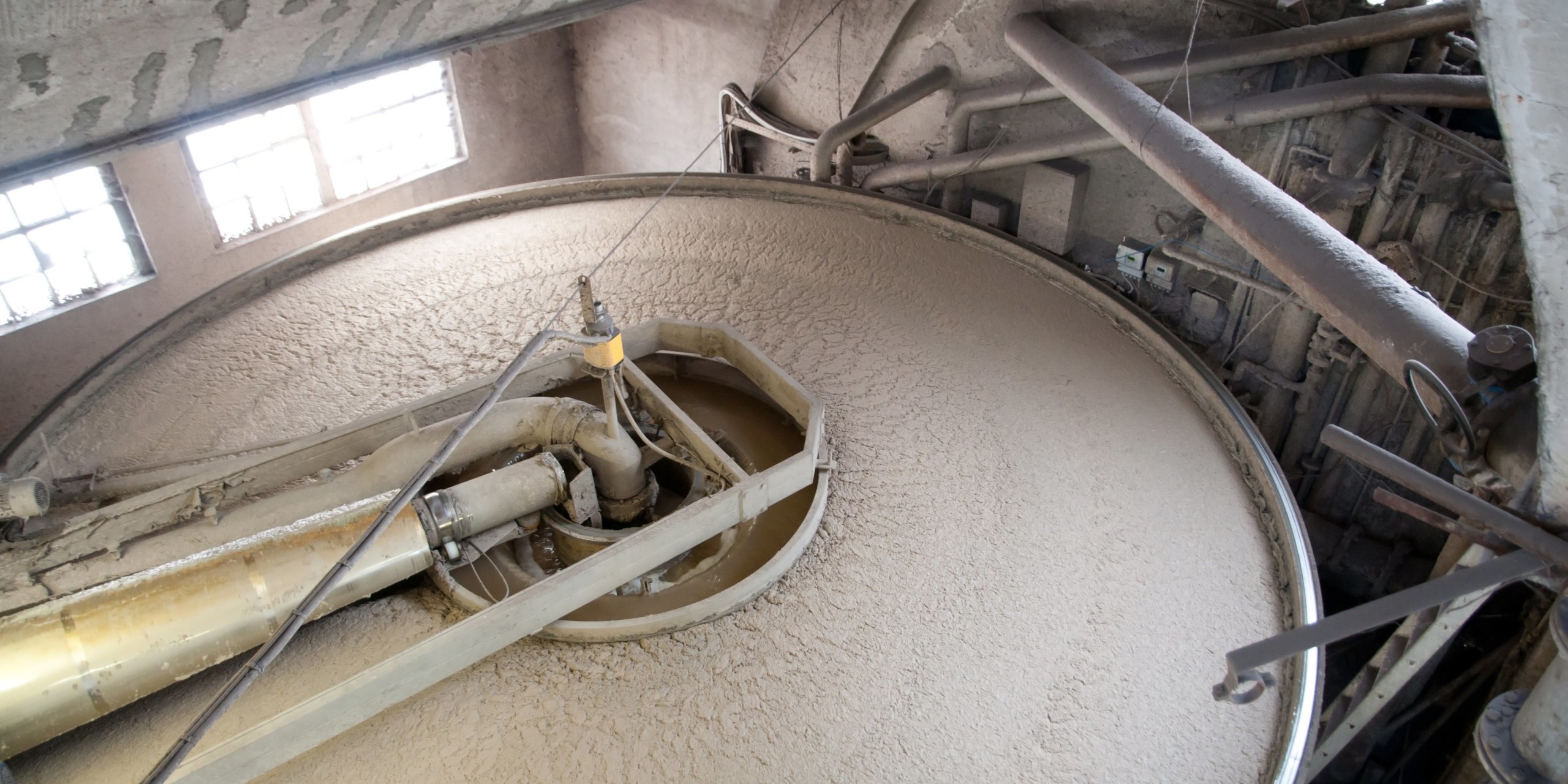 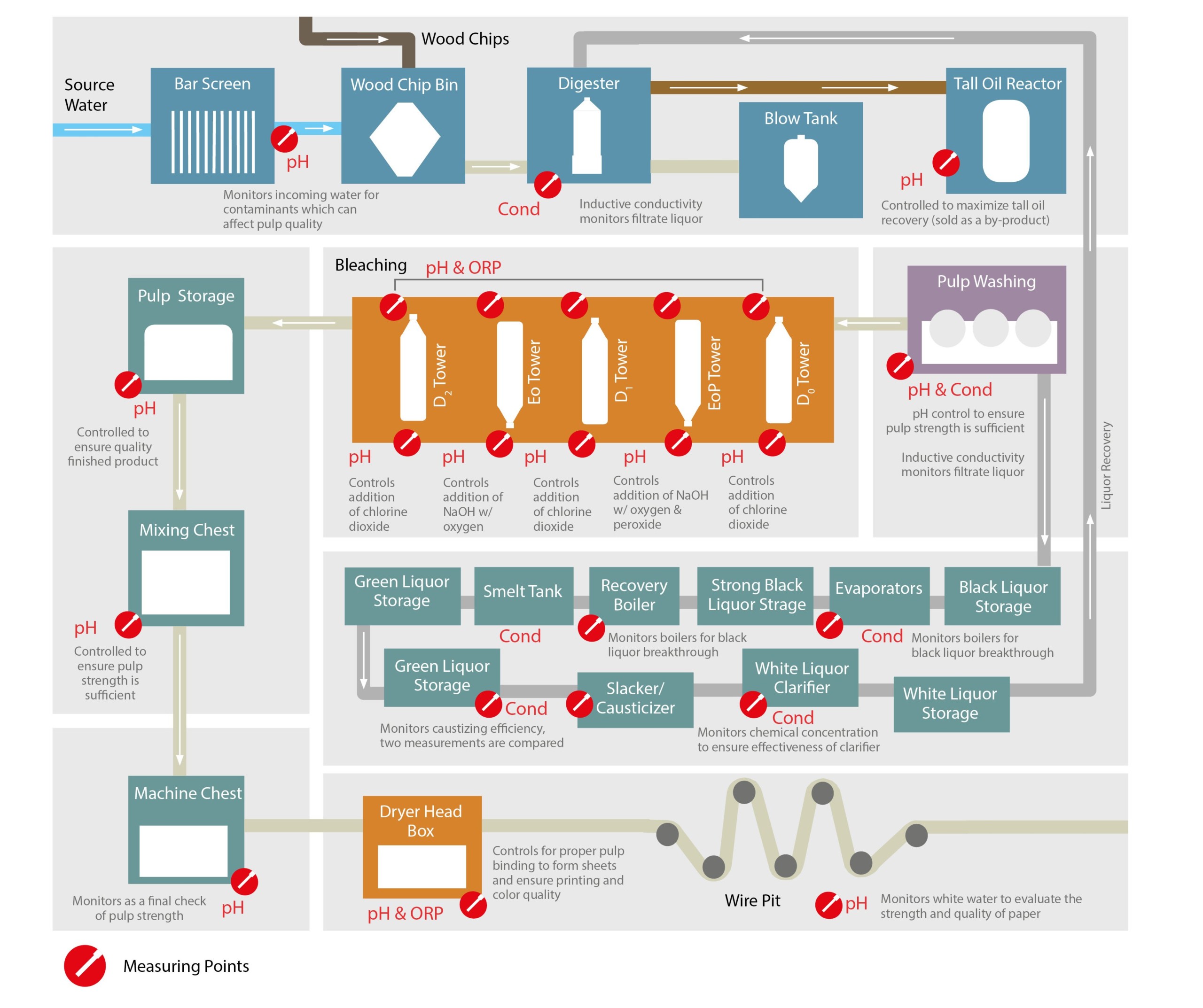 Measuring sensors for process control in pulp and paper production

Since the invention of wood pulp paper and the so-called sulfate and sulfite processes in the middle of the 19th century, it has been possible to produce paper based on wood. During sulfate and sulfite processes, mechanically defibrated wood is chemically decomposed by boiling it in solutions containing sodium hydroxide and sodium sulfide or sulfur dioxide in order to separate unwanted components from the cellulose fibers contained. This includes wood-forming lignins in particular, along with polysaccharides referred to as “hermicelluloses,” as well as resins and minerals. While the cellulose fibers in the form of aqueous solutions are cleaned and bleached in various multi-stage processes, the separated resins are used to produce tall oil, which is refined and then used in the manufacture of products such as soaps and lacquers.

Processes of pulp and paper production

The quality of the finished product depends not only on the properties of the raw material, but also on the various cleaning and blending procedures used to process it. These essentially include the boiling of pulp in white liquor used in the sulfate process, subsequent filtration and washing of boiled matter in filter lines, and multi-stage tower bleaching, in which the pulp is alternately treated with various oxidants. The pulp, known as stock at this stage, then enters the stock preparation stage. There it is first mixed and ground with various fibrous materials in the mixing vat, depending on the recipe. Fillers such as kaolin, calcium carbonate, glue and inks are added in order to achieve the desired properties of what later becomes paper. In the headbox, the pulp is then applied evenly to screens by fine nozzles for dewatering and aeration. These then transport it to the pressing and drying section of the paper mill.

Numerous pH and conductivity sensors must ensure process quality at the various production stages during pulp production. Chemical pulping that is too intensive, or dosages of bleaching agents and residue that have not been monitored sufficiently, can damage fibers easily and reduce their strength, especially during boiling or bleaching. Such damage can only be detected in final quality controls, in which the cardboard or paper is tested for tear length, tear strength, and resistance to bursting. The intensity of the chemical pulping must therefore be monitored and regulated. This is done using conductivity measurements, in which the white liquor concentration in the pulp boilers is monitored. As the hot process medium is highly alkaline and extremely contaminated, the SE 655 inductive conductivity sensor has proven its worth due to its robust design made of corrosion-resistant PEEK. The electrodes of the sensor, which has been designed for measuring the concentration of acids and alkalis in heavily soiled and fouling media, have no direct contact with the medium. Instead, the SE 655 has a large toroidal sensor opening, which reduces the risk of contamination to a minimum. SE 655 is designed for a broad measuring range from 0.002 to 2000 mS/cm at temperatures from -20 to 110 °C and withstands pressures up to 20 bar.

ORP and pH measurement play a major role in tower bleaching. The bleaching process serves to remove residue such as residual lignin. In tower-shaped containers in several stages, the pulp is alternately treated with chlorine dioxide and sodium hydroxide – or in more modern, environmentally friendly processes, with hydrogen peroxide, oxygen, and ozone. Bleaching processes are based on an exchange of electrons between bleaching agents and the bleached substances. The effectiveness of bleaching agents depends on the size of their oxidation potential, which can be determined by ORP measurements.

Media contaminated by solids often block the reference system of conventional sensors, but the SE 564 Memosens ORP sensor is used here, which eliminates this risk by means of a double-perforated open junction. The reference system with modern polymer electrolyte guarantees potential measurement with long-term stability from -1500 mV to 1500 mV. After each bleaching process, the pulp is washed and must be checked for bleaching residue by pH measurements before it comes into contact with other chemicals in the next tower. Low maintenance and developed for media with high debris loads and extreme ionic strength, Memosens SE 571 is used for pH monitoring after each wash. Its reference system is in contact with the process medium via a PTFE ring junction, minimizing the risk of contamination or blockage. The sensor is also protected from leaching by its own salt reservoir. A special cartridge reference element with silver ion trap prevents poisoning of the reference system.

Recovery of the chemicals used

Recovery of the chemicals used is crucial for cost-efficient operation of pulp mills. For this reason, a large part of pulp and paper plants is used to process the black liquor resulting from the filtration and washing of boiled and separated wood fibers. The black liquor initially has a solids content of up to 20 percent. This is increased to approximately 80 percent by means of evaporation, so that the thick liquor now produced can be incinerated after the addition of sodium sulfate. By converting the energy released into electricity and process heat, pulp mills can cover a large part of their total energy requirements. At the same time, smelt consisting of sodium carbonate and sodium sulfide remains, which is dissolved into green liquor. Subsequent causticization of the green liquor with lime milk produces sodium hydroxide and lime sludge, which is separated out by filtration or sedimentation. While the white liquor thus obtained from the green liquor is reused in the boiling process, the lime separated after drying and firing is used to produce white liquor again. Memosens sensors SE 630 is used to measure conductivity, which is required not only in different sections of the pulp washing process but also in different stations in the black liquor circuit. The conductivity sensors with a measuring range from 10 µS/cm to 20 mS/cm are designed for a high pressure of up to 16 bar and temperatures of up to 135 °C. They are quite flexible in use due to their high chemical, thermal, and mechanical resistance as well as their easy cleaning. In the chemical recovery cycle, they also serve to monitor the breakthrough of black liquor boilers and to monitor the efficiency of green liquor re-causticization, for example.

The safety of technical personnel

Many measuring points in pulp production are positioned in environments where the presence of technical personnel must be restricted to a minimum. Due to the aggressive process media with high solids content, the sensors presented above are also subject to limited service lives despite their very robust design. However, they do considerably reduce maintenance and thus the time personnel remain at the measuring points. The use of pre-calibrated Memosens sensors completely eliminates the need for on-site calibration. In addition, Memosens sensors – unlike hard-wired electrodes – can be quickly plugged in and unplugged thanks to their quick-release bayonet couplings. These couplings, which transmit sensor data and supply voltage inductively, are completely insensitive to moisture and deposits, there is no need for any cable management, which is necessary when swapping conventional products. For inline measurement with Memosens sensors, retractable fittings from the SensoGate series are also available, which can extend, clean, calibrate, and re-introduce the sensor into the process at intervals and fully automatically. The flushing chamber of these retractable fittings perfectly seals against the process, so sensor maintenance can be carried out at full process pressure. The manually operated retractable fitting SensoGate WA 131 M offers a particularly economical solution for rapid replacement of inline sensors.